My name is Phil Parkes, and I am the volunteer Co-ordinator at Expert Citizens CIC. I was initially going to write this blog about my volunteer experience and how I came to be involved in volunteer recruitment and retention at Expert Citizens. However, the pandemic altered my role and lead to changes in how we as an organisation work, not least highlighting how important collaborative working is. So instead, I’m writing about how I have been approaching network buildings over the last twelve months.

As an organisation, Expert Citizens had already identified the power of joint working and were working with multiple other agencies before I came into my role as a paid member of staff after volunteering with them for five years. We were already a part of the APLE collective, and our Insight Awards have celebrated people from all organisations who go above and beyond since its conception in 2015. COVID-19 drastically changed the way we could work with volunteers and other organisations for a long time, so I just decided, partly out of necessity to start working on networks and reaching out to other local organisations.

Local Stoke on Trent based community hub Middleport Matters is one of the first connections I made. I first went down to the hub as part of their ‘Week of Action’ which encouraged local people to become involved in various community efforts. I noticed how much work they did to open up people’s worlds, get people active again and to help them get by day to day, especially during lockdown. I met the staff and instantly loved the place, so once lockdown ended, I made myself a regular participant in their Friday men’s club. I go down there most weeks now and we just have conversations, all the people get involved and we have a bit of fun in the process. This in turn lead to me getting involved in their Root ‘n’ Fruit communal allotment.

I first became aware of the great work done by Ruff ‘n’ Ruby’s supporting the young people of Stoke on Trent through their shop in the town centre and their social media presence. I got the chance to find out more about them at a collaborative planning meeting where we started the process of creating a new youth hub in the city. I quickly noticed howopen they were to work with everyone, there were people from everywhere from local government to the local football team present at the meeting keen to be involved. This enticed me to get further involved and I am now a regular at meetings and share their dream of having positive impact on young lives.

I met the CEO of Walk, Talk, Action partially through Expert Citizens but I also made a personal connection with the organisation as they have a special focus on supporting people who have been in the armed forces. Since then, I have done things I didn’t think I was capable of including taking part in a charity bike ride to support veterans and facilitating a family Halloween walk. Walk, Talk, Action has gone from strength to strength, they are constantly joining forces with other community groups to set up walks. I still haven’t joined as many as I probably should have done!

These are just a few of the new networks I have established. I think it is important to share knowledge, resources and time and I am always on the look out for somewhere new to pop into and never leave, especially if there is cake! In my honest opinion working together with organisations such as thesemakes everything easier. We are all wanting to leave the world a better place than we found it and you cannot look past the power of the collective voice. Working so closely with the APLE collective has shown me what can be achieved when we combine our efforts and I for one don’t plan on stopping anytime soon. 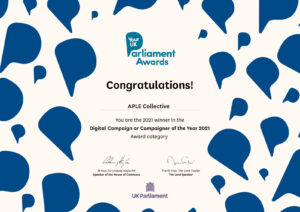 “Survivors, surviving surviving”. @ManAboutADog2 put lived experience at the heart of their work, providing peer support and highlighting that suicidal thoughts and attempts should not be hidden. You can find out more about their work here: https://manaboutadog.org/. #APLEMonth2021

As part of their #APLEMonth2021 spotlight, @startpointsk6 are sharing the story of the brilliant @ManAboutADog2. Led by suicide survivors Chris and Rachel, Man About A Dog support people in #Stockport and beyond who have attempted suicide or are considering an attempt.

Always great to see the work going on in our communities. Let’s show our appreciation of this valued work and retweet, share and comment #APLEMonth2021 https://twitter.com/aplecollective/status/1401818714450837504

Led by lived experience, @startpointsk6 use #CommunityOrganising to reach out, connect with people and work to create change. They are the lead partners for #Stockport’s Digiknow digital inclusion alliance and they run a ‘Communiversity’ learning programme #APLEMonth2021

Through #CommunityOrganising, @startpointsk6 have positively changed their community. This includes a free breakfast club for young people and supporting residents to create a 'Community Neighbours' Group. You can find out more here: https://startpoint.org.uk/community/. #APLEMonth2021